With a Jeffco Schools mill levy override, bond issue and the statewide Amendment 73 on the ballot this November, you may wonder why schools are asking for more money while property taxes continue to rise.  The answer has to do with how Colorado school districts are funded and how far those dollars stretch to educate students.

Colorado public school funding is mandated and limited by Colorado’s 1994 Public School Finance Act.  For Jeffco Schools, approximately 65 percent of its funding is controlled in this way.  The act requires the state to set a fixed amount of funding per enrolled student to all Colorado school districts each year. That amount is adjusted annually based on each school district’s:

Funding is also impacted by the Taxpayer Bill of Rights (TABOR), which strictly limits the legislature’s ability to effectively respond to school districts’ financial challenges and requirements.

In addition, since 2010, the Colorado state legislature has used the “budget stabilization factor,” formerly known as the “negative factor,” to further lower per-pupil funding in response to state budget constraints.  The legislature has imposed the budget stabilization factor on the state school budget each year, underfunding Jeffco Schools by an estimated $642 million in the past eight years.

The end result of these adjustments is that per pupil funding for Jeffco Schools  is $7,945 for 2018-19. This translates to Total Program funding of $643.4 million.

The two largest components of Jeffco’s Total Program funding include local property taxes and state funding. Ownership tax is a third component that represents about 3 percent of Jeffco’s funding.

The combined effect of TABOR, the negative (or budget stabilization) factor and reductions in the state proportion of Total Program funding is the primary reason that Jeffco Schools funding has grown minimally over the last 10 years even though property taxes have increased substantially.

Jeffco Schools funding has not kept up with inflation

The chart below presents Jeffco’s actual per-pupil Total Program funding for 2009-10 through 2018-19 and the projection of per-pupil funding if it had simply been tied to the consumer price index (CPI) for the Colorado Front Range. This chart makes clear that Jeffco per-pupil funding has not kept up with inflation. In fact, 2018-19 funding represents more than a 13 percent deficit when compared to inflation.

Mill levy overrides (MLOs) provide additional ongoing funding for operating expenses. MLOs are not part of the Total Program budget and are a way that local taxpayers can increase school funding above the level set by the state.

Typically, mill levy override amounts are not tied to inflation. The dollar value of the override remains constant in the face of ever increasing costs.

Bonds provide borrowed funds that can be used only for capital improvement. Those include items like new school construction, additions, renovations, and new roofs. Jeffco’s bonds are typically paid off over a 20 year period, after which taxpayers are no longer billed for that expense.

The most recent bond was approved by voters in 2012 to fund basic facilities maintenance to keep students warm, safe and dry. It included items such as replacement of leaking roofs and windows, and the replacement of failing heating and ventilation systems.

The 2004 bond provided funding to build new schools and additions and to do major renovations. It included:

Approximately $42 million collected from property taxes are allocated to service the district’s bond debt in 2018-19.

How are Jeffco Schools tax items displayed on my county property tax statement?

On your tax bill, the portion of the total program budget paid by local property taxes is added together with the mill levy override. Those are listed as “R1 School General Fund” on your tax bill.

The Bond Redemption Fund is listed as a separate line item on the bill. 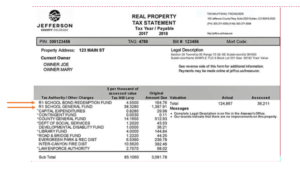 How Jeffco Schools funding compares to districts of similar size

When compared to districts  with similar student populations ranging from 79,000 to 95,000, Jeffco’s budget is the smallest. This chart compares Jeffco’s budget nationally to the five districts just larger than Jeffco Schools and the five that immediately trail Jeffco in student numbers.

Of the 11 districts listed, all have budgets that are notably larger than Jeffco Schools, including Jeffco’s neighbor, Denver Public Schools.

State and school funding are constrained by TABOR limits, making it extremely difficult to attain funding levels equivalent to other similarly-sized school districts, or to try to keep pace with inflation. As a result, schools continue going back to voters to request additional revenue streams like Jeffco Schools 5A and 5B and Amendment 73.

* Note that Colorado voters also approved Amendment 23 in 2000. Amendment 23 requires the state to increase annual funding by inflation plus 1 percent from 2001 to 2011, and then by inflation in all the following years. However, the legislature introduced a new factor for the 2009-10 year that reduced funding after a budget shortfall. The “Budget Stabilization Factor” was introduced in 2010-11 to reduce per-pupil funding below the required levels set by Amendment 23. For 2018-19, it resulted in a shortage $75 million that otherwise would have gone to Jeffco Schools.

Dave Coren has lived in Jefferson County since 1993 with his wife and two children who are both Jeffco Schools graduates. He earned a Master’s of Business Administration from Cornell University and a Bachelor of Arts degree from Bucknell University. In addition to Colorado-based avocations (skiing, mountain-biking, 14er-bagging etc), Dave is passionate about social justice and the belief that public education is a key ingredient to lifelong opportunities. Please visit our "About Us" page to learn more about Dave and our other writers.

One thought on “Despite growing property taxes, Jeffco Schools budget limited by state”