Five years ago, a group of Jeffco parents approached the district about changing start times to create a more equitable school day for all students. This week, Jeffco Schools took another step toward changing start times by gathering feedback on the proposed time changes with a community survey.

The results will be used to help the district and school leaders identify and address challenges for families with the proposed changes to school start times.

The task force members found that changing start times would:

Proposed start times are grouped by bus routes, with schools in Jeffco’s west area (specifically, schools in the Conifer and Evergreen articulation areas) on a slightly different schedule due to the transportation needs of these mountain communities.

Proposed changes for Jeffco neighborhood schools (except Conifer or Evergreen) 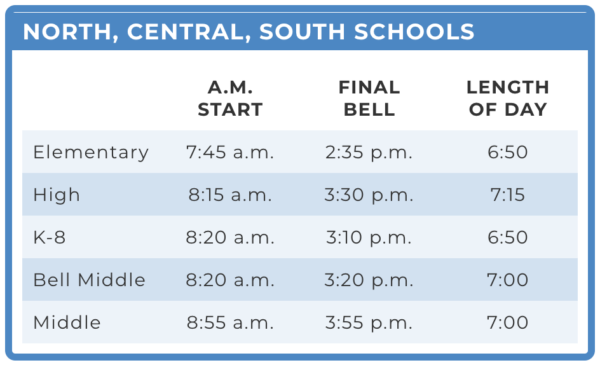 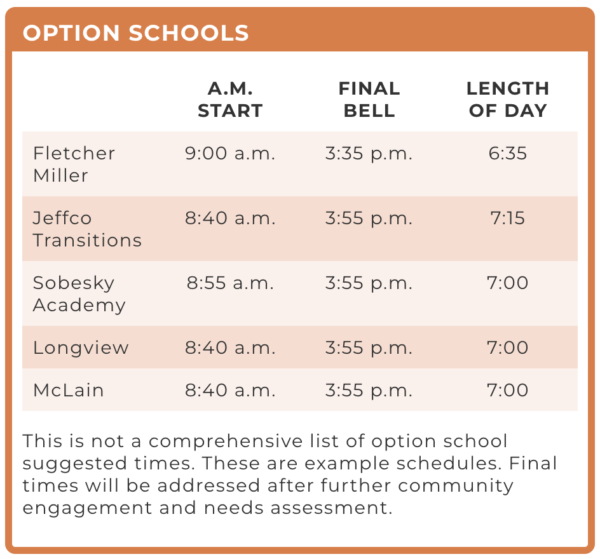 Why now? Why Jeffco?

Since the task force began its work in 2018, members have gathered and presented data from Jeffco community surveys and research on later start times to the school board four times:

Jeffco School Board members approved hiring a consultant, who completed a report in August 2020. According to the report, the district can save nearly $1 million per year by changing start times.

In January 2022, the Jeffco Board of Education instructed the superintendent to explore what it would take to launch healthy and equitable start and end times for the upcoming 2022-23 school year.

At the Jan. 12 board study session, Superintendent Tracy Dorland noted the connections to the work to her areas of focus and strategic planning for the district and how unequal instruction times were for students school by school.

“As I listened to the project, the proposed solutions, and the issues that this project was trying to address for our district, I was struck by how connected it really was to some of the areas of focus I had identified for our district in terms of the work this year and my areas of exploration as a new superintendent,” Dorland said. “I think this definitely is an area where we do not have a just right balance of coherence and autonomy.”

”It also highlighted for me efficiency of our resources in regard to our operations,” Dorland said. “With the disparate number of start times that we have, I believe we have a huge lack of efficiency in the operations of our transportation fleet.”

In addition, Jeffco surveyed school principals in January and an overwhelming number of principals were open to changing school start times.

What does the research say?

A four-year study of later start times found that when the high school day started at or after 8:30, high schoolers reported less depressive feelings than high schoolers who started earlier than 8:30.

What are other districts doing?

Feedback on the proposed Jeffco start times is due by Friday, Feb. 25 at jeffcopublicschools.org/start_times.

You may also be interested in reading these posts.

Lisa Cook, Ph.D., is a writer, editor, musicologist and Jeffco resident since 1999 with two children attending Jeffco Schools. Lisa earned a BA from Valparaiso University, a Masters in Music from Colorado State University, and her Ph.D. in musicology from the University of Colorado at Boulder. When not working, she can be found running (ideally on mountain trails) with Midnight, her miniature poodle. Please visit our "About Us" page to learn more about Lisa and our other writers.