In an effort to continue highlighting the wide variety of choices available to Jeffco students, Jeffco PEN is covering the neighborhood high schools in each of Jeffco’s 17 articulation areas.

To learn more about Jefferson Junior/Senior High School (JHS) and the Jefferson Articulation Area, we talked to JHS Principal Michael James. With more than two decades in the education field, James has helmed JHS for the past five years, previously serving as one of the school’s Assistant Principals, and played a critical role in the 2015 reconfiguration of the articulation area.

JHS formed in 1955 when two existing schools, the Edgewater Mustangs and the Mountain Wildcats, combined their student bodies. Saint Jeff, symbolizing “the honorable qualities of a fighting spirit,” became the mascot.

Mill and bond will have significant impact

Fast forward to 2019, and Jefferson Junior/Senior High is poised to benefit from new mill and bond dollars.

“If 5A and 5B don’t pass, I don’ think I can do this anymore,” James remembers thinking during fall 2018. He said he felt that he could not continue to manage a “dilapidated” building with “the poorest landscape and the poorest fields.”

“To me, 5A means an equalization of pay, an equity of pay, as you compare our teachers to surrounding districts,” James said. “It is not equal, and as we enter another hiring season, it is always apparent to us that we cannot get higher level teachers because of their experience level or what they’re making in other districts.”

Because JHS shares a border with Denver Public Schools, James said the pay disparity is even more obvious.

“5B [the bond] is huge for us,” James said. “5B is all about equity.” The building will receive approximately $13 million in improvements, including new square footage. That means new programming.

“We can’t just put programming in, even though it’s the best thing for the students, if we don’t have the facility for it,” James explained.

Now, he is happy to be in a phase of “dreaming the world and looking at if we could have anything, what would that be, and then narrowing that down to an extent within our financial limits in order to make the best choice for our kids and our future.”

“We’re going to have our facility updated and we’re going to be able to pull programming in that kids never would have had otherwise,” he said.

New visions for the Jefferson area

James has been taking his staff through a visioning process as they contemplate just what their $13 million addition might look like and be able to provide.

To build on the cohesiveness of the Jefferson articulation area, he will be doing similar work with leaders at Jefferson’s three feeder elementary schools — Edgewater, Lumberg and Molholm.

“I’m doing that to ensure that the voices of our kids that aren’t here yet are also able to be a part of that dream, that future planning,” he said.

New programming will likely include one of Colorado’s Career Cluster models, making JHS a center for that model.

“We are already a dual language strand, but want to be a dual language school based in problem based learning (PBL) which also has one career cluster model and other options within our traditional programming,” James explained. He emphasized that his mission is to add on to programming while not sacrificing anything students already receive at JHS.

One of the goals was to limit the number of transitions that highly-impacted students in the Jefferson area would navigate during their time in Jeffco. In August 2015, both the Jefferson area and the Alameda Articulation area became Jeffco’s only K-6, 7-12 grade configurations.

“We have a 25% mobility rate, so one in four kids who start here don’t finish here,” James said. “We also have a lot of kids who don’t necessarily make strong adult connections in their families. Making them with adults at the educational level can be quite difficult as well.”

Since this change, school board members have voted to move all other articulation areas to K-5, 6-8, 9-12 configurations, while leaving Jefferson and Alameda in their current configuration. However, the additional square footage would make it possible to change to a different grade configuration to align with the other areas, James said.

“In a new building, if I build accordingly, we should be able to get enough room in that building to account for sixth grade,” he said.

“It’s making the diploma real, and it’s also creating a school culture that supports these families and these students,” he said.

Mindset and mantra at Jefferson

So what makes JHS successful?

“Mindset and mantra,” James said. “It’s all about convincing kids and families that a future outside of their world exists. It’s about giving kids opportunities to see things they haven’t seen, in order to visualize their goals. At all times, we are constantly moving to the next step in opening our students’ eyes to their future.”

James added that he wants people to know that while his students accomplish a great deal, those achievements are even more impressive in the context of adversities. Among the adversities his students face are poverty, homelessness, discrimination, losing close family members, and facing other significant challenges in their lives at home.

At JHS’s May 2017 graduation ceremony, James commended graduates for being “champions at overcoming hardships.”

“When we have them hooked through connections with adults or connections to our school, that’s when we know we can push them to that next step,” James said.“If you don’t have that connection, you’re never able to build that academic stamina.”

In February, James took his student senate to Washington, DC, where they visited the Capitol, attended a leadership conference, and had a chance to explore the city. Eleven of the 17 students had never been on a plane or traveled outside of Colorado before.

“Jefferson kids are resilient and also appreciative of the opportunities and experiences that they get to have,” James said. He added that opportunities like the DC trip are rewards for students who have committed to doing the work expected of them. 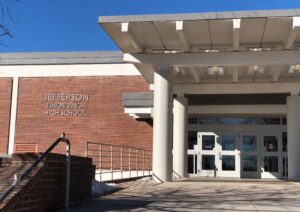 JHS has also worked to increase the number of students who get to see a college campus each year, and even has a counselor dedicated to helping graduating seniors make the transition from JHS to Red Rocks Community College.

“Being able to navigate a new campus, such as Red Rocks, plays a significant role in students’ likelihood of success there,” James said.

Despite those resources, JHS continues to have additional mental health needs. With more funding, he would invest in behavior interventionists to identify seventh and eighth grade behaviors. Then he would invest in professional development on how teachers can better help those students improve.

“We have a huge connection with Brady [High School], and Brady is our fast forward for credits,” says James. ”If a student has already failed a class, but met the hours required to attend that class, Brady enables them then to prove their learning for the standards that are most important within that course.”

James would love to offer the same program at JHS, but noted no school can have everything. The partnership with Brady makes a key difference for certain students in keeping them moving forward.

After spending time at Brady, James explained the students are reinvigorated and excited to come back to JHS. At that point, he does all he can to bring them back and have them graduate with their class. He also has those students share their experience to try to prevent other students from having to take a similar detour.

“Wraparound services are the most important asset to our building as I look at structures that are in place,” James said, and JHS was the first Jeffco school to adopt a Community School model.

Community Schools incorporate several pillars, and James explained that JHS focuses most on community outreach. Home visits ensure parents have opportunities to be heard and helped, and monthly accountability committee meetings draw at least a dozen parents. James also makes a point to translate conversations into Spanish as necessary.

Another partnership unique to the Jefferson articulation area is the Edgewater Collective. Founded six years ago by Joel Newton to help area schools thrive, the group helped launch the Jefferson Success Pathway, which began with the grade configuration change.

“Joel Newton is really great at rallying the troops and enabling different community members to be supports,” James said, noting he likely would not have the time in his own schedule to make those critical connections and cultivate those valuable resources. “It’s been a fabulous asset for our school.”

Other community members have provided staff lunches on professional development days. They even a car for a student who was previously riding buses for an hour and a half every morning to JHS and two hours back home. That car enabled him to finish school at JHS and attend Red Rocks Community College with a Jeffco Schools Foundation Hero Awards scholarship.

“We’ve been very smart about that work,” James said. He and Edgewater Principal Katherine Chumacero also collaborate on a Parent University program, meeting monthly for the past five years with 40-50 families.

“We have dinner together, and then we have a lesson we teach,” James said.

Noting he’s famous for teaching Parent University while also holding babies, James added, “It’s been extremely successful. Now those babies are going into preschool and kindergarten, and their families have become stakeholders in what we’re doing in the area.”

At JHS, extensive professional development program is based on continuous improvement.

“Even though I hear often, ‘There’s nothing like the systems at Jefferson,’ we can always improve,” James said. “We have so many great things in place that we can go to when we need it. It’s all about student performance and it’s all about student support — every single part of it — and it’s nonstop work.”

“I look at my staff, and they work so darn hard towards common goals. There is no way that there’s any staff that works harder than this team,” he said.

Currently displayed on James’ office wall are oversized pages of notes addressing how to effectively start a classroom each day.

“That’s my data for what’s going on in the first six minutes of class,” he noted. Recently, he and a team of educators visited 19 JHS classrooms. There they modeled and observed these actions as another example of the continual improvement mindset at JHS.

“It’s about what do we do to refine who we are today and where we’re going tomorrow,” he said. James added that JHS and Edgewater Elementary are in the process of moving to a PBL model. Meanwhile, Lumberg will focus on expeditionary learning. “There are so many things in place that we’ve succeeded at in our area.”

But there are always additional needs.

“I am able to make things work because of a combination of my general fund and my grants that we go after,” explained James. He dedicates significant time to do the bulk of the grant writing himself. The district also works side by side with James on bigger funding requests.

During Jeffco’s first round of Innovation Acceleration Fund grants, he applied for but did not receive funding for a $75,000 math tutoring program that would have provided two to three tutors in every 7th through 10th grade math classroom.

For more about the Jefferson articulation area, watch the 9NEWS series, “The Jefferson Project.”

You may also be interested in reading these posts.

Kelly Johnson is a Jeffco Schools parent, married to a Jeffco grad and the daughter of two Jeffco Schools grads. Prior to staying home with her sons, Kelly worked in public relations, specializing in retail, restaurants and crisis communications, and as a local television news producer. Kelly graduated from the University of North Carolina at Chapel Hill with a degree in journalism. Please visit our "About Us" page to learn more about Kelly and our other writers.